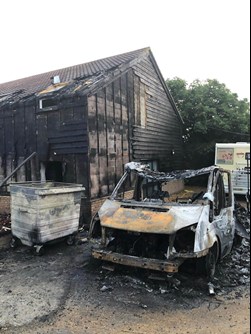 On Wednesday (19) at 1.57am, firefighters were called to a building fire on Toft Road, Bourn.

On arrival, crews found a fire in a campervan had spread to a nearby fuel tank and building. Firefighters wearing breathing apparatus used two hose reels and a foam jet to extinguish the fire.

Crews returned to their stations by 10.30am. The cause of the fire was accidental.