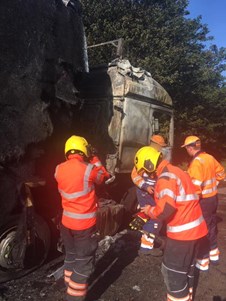 On Thursday (4) at 6.49am two crews from Huntingdon, one crew from St Neots and one crew from Thrapston, Northamptonshire Fire and Rescue Service were called to a lorry fire on A14W near Spaldwick.

The crews arrived to find a lorry well alight. Wearing breathing apparatus, firefighters used two hose reels, one jet and one Cobra high pressure equipment to extinguish the fire before returning to their stations by 10.05am.