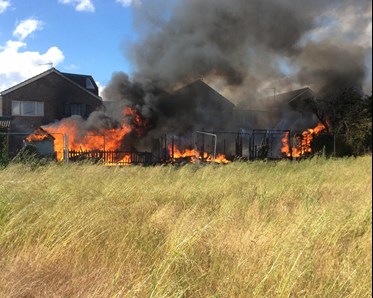 On Sunday (30) at 5.02pm five crews were called to a shed fire on Clarkes Way, Bassingbourn.

Crews attended from Cambridge, including the south roaming fire engine, Gamlingay and Royston from Hertfordshire Fire and Rescue Service.

On arrival firefighters were faced with a large fire involving multiple sheds which was starting to spread to the rear of four houses. Wearing breathing apparatus they used two jets and two hose reels to extinguish the fire, before returning to their stations by 10pm.

Station Commander Kelly, who investigated the cause of the fire praised the efforts of the crews involved, saying "The crews did a fantastic job responding to this incident. The conditions were particularly challenging. If it wasn't for the quick thinking and hard work of the firefighters, it could have been a very different outcome."