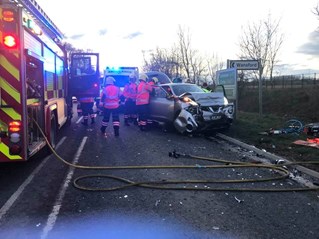 On Tuesday (4) at 4.36pm a crew from Dogsthorpe, the north roaming fire engine and one crew from Yaxley were called to a road traffic collision on A47 near Wansford. Crews arrived to find a collision involving two vehicles.

Using specialist equipment, firefighters rescued one casualty who was left in the care of the ambulance service. One casualty was released before the arrival of the fire service.

Crews returned to their stations by 6.10pm.