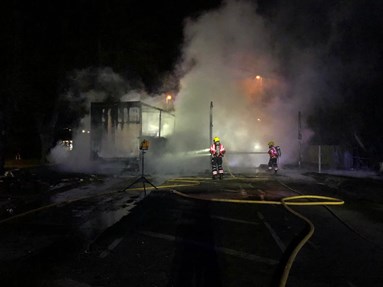 More than 20 firefighters, including crews from Huntingdon, Papworth, Gamlingay, Cambridge and Ramsey, including the water carrier, attended the incident.

The crews arrived to find a well-developed fire involving a lorry that was involved in a road traffic collision. Wearing breathing apparatus they extinguished the fire using hose reels.

There were no casualties requiring treatment for any injury.

The crews remain at the scene damping down the area and making sure it is safe.

Crews remain at the scene clearing the area and making it safe. However, due to the chemical that the lorry was carrying, a specialist clean up operation will be required. This is likely to take several hours and the road will need to be resurfaced due to the damage.

London Road will be closed in places until early tomorrow (Wednesday), which will impact those that would normally use the road to access St Ives, or the A1307. Please plan ahead and seek an alternative route for work, or the school run, where possible.

The crews left the scene of the incident by around midnight. Re-inspections were needed through the night to check for hot spots around the vehicle.

London Road remains closed so please seek alternative routes if travelling to or from St Ives.