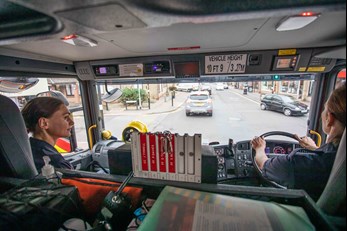 A Cambridgeshire firefighter has been recognised as a rising star for being a role model and blazing a trail for women and those that speak English as a second language.

Agata Wieczorek, known as Aggie, was awarded runner up in the 'Firefighter Rising Star' category of the Women in the Fire Service Awards 2020. Based at Huntingdon Fire Station, Aggie was nominated for her commitment and dedication, as well as her willingness to develop her skills and act as a role model for others.

Originally from Poland, Aggie joined Cambridgeshire Fire and Rescue Service as an on-call firefighter at St Neots Fire Station in 2012, following in the footsteps of her father who was a volunteer firefighter in Poland. She then went on to become a wholetime firefighter and is now based at Huntingdon with red watch. The Service put Aggie forward for the award for her positive attitude and her determination to overcome challenges to succeed.

Aggie said: “I feel very proud and privileged to be a firefighter and have a very supportive team around me, which has allowed me to grow and develop in the role. I'm humbled to receive recognition for doing what I feel is my job, to try and be the best I can be and ensure those around me strive for the same.”

Aggie has progressed quickly to the rank of crew commander, the first role on the managerial ladder, meaning she is also able to take charge of an emergency situation. Aggie has also written a case study, about herself, for the Home Office on female role models within the fire service, hoping other women will be encouraged to apply for promotion after seeing it can be achieved.

Assistant Chief Fire Officer Jon Anderson said: “We are all very proud of Aggie and congratulate her on being recognised as a rising star. Aggie has already demonstrated in her short career that she is a confident and highly skilled firefighter, as well being a very positive influence and a great role model.”

Out of nine nominees, Aggie finished runner up in the Women Firefighter Rising Star category and will be presented with her award later in the year.