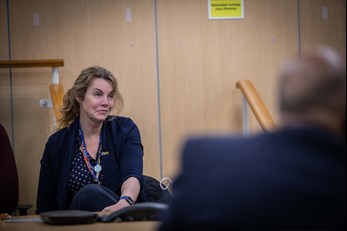 Cambridgeshire Fire and Rescue Service's Equality and Inclusion Advisor Jacqui Gavin, has been awarded a British Empire Medal by Her Majesty The Queen.

Jacqui has been recognised in The Queen's Birthday Honours List for her continuing contribution to highlighting and driving positive change in transgender issues in the workplace. A figurehead in the LGBTQ+ community, Jacqui has been an active campaigner since 1983, following her own transition, serving as an ambassador for several charities promoting diversity and inclusion and working to eradicate homophobia, biphobia and transphobia in schools.

Prior to joining the Service last year, Jacqui worked in the civil service where her passion and dedication for improvement led to her being the first ever chair of the Transgender Network within the Department for Work and Pensions. Jacqui also organised a landmark conference, This is Us, in Milton Keynes to highlight LGBT issues in the workplace. Her work has also been nationally recognised. In 2015 Jacqui was shortlisted for an Excellence in Diversity Awards and was Diversity Champion at the British LGBT Awards in 2016. Jacqui also earned a Points of Life award from the Prime Minister in February 2019.

Jacqui said: “I feel humbled beyond belief to have been recognised in this way and thank Her Majesty for such a prestigious award.

“I am only able to do what I can because of the support and dedication of those around me, both with Cambridgeshire Fire and Rescue Service and the LGBTQ+ community. It is a team effort and I want to thank everyone for their part in making a difference.”

Chief Fire Officer Chris Strickland said: “I am delighted that Her Majesty The Queen has seen fit to honour Jacqui for her excellent contribution to the LGBTQ+ community. Jacqui's passion and enthusiasm is evident in everything she does and she has already made an impact in her short time with us. This is a great honour for her and I, along with the rest of the Service, am delighted Jacqui has been recognised for her contribution.”