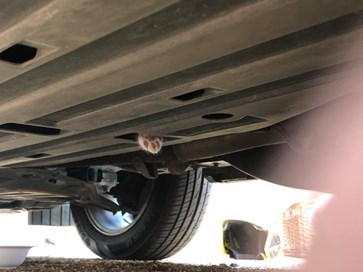 An on-call fire crew had a delicate rescue to purrform over the weekend.

A crew from Cottenham was called to a trapped animal on Green Street in Willingham at 3.14pm on Saturday. They arrived to find a kitten had been exploring and managed to trap itself underneath a car.

Watch Commander Julian Bridgeman from Cottenham Fire Station said: “We spent the afternoon rescuing the little kitten from inside the bumper of a car. The poor thing had been stuck for a few hours but we managed to safely remove the bumper and rescue it without damaging the car, or the cat.”

The crews were back at their station by 4.30pm.

Station Commander Paul Oliver added: “Our crews are often called to help animals in distress in a variety of different situations. We have specially trained staff that can deal with most types of rescue, so we can try and come to the aid of an animal in need, rather than the owner putting themselves at risk.

“In this case, it was a delicate operation to retrieve the kitten without causing it any harm. Our crews are well trained in removing casualties from vehicles, so know their way around cars. This was an unusual rescue, but the crew did a great job in getting it done safely.”

Cottenham is one of the Service's on-call fire stations, where crews respond to emergenices while either at work or home. If you live within five minutes travel time of any on-call station, why not consider joining and serving the local community as an on-call firefighter. More information, including the list of stations, is available on our website: www.cambsfire.gov.uk/oncall.