Fire service pays tribute to much loved and respected colleague 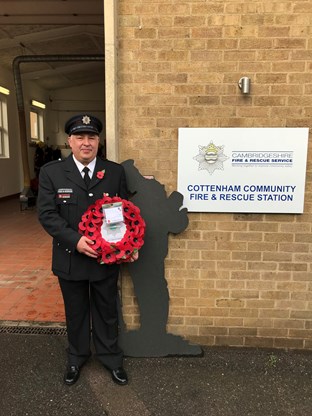 Staff across Cambridgeshire Fire and Rescue Service have been paying tribute to on-call firefighter Danny Granger who sadly died in hospital yesterday evening after a four week battle with Covid-19.

Danny, aged 52, had served at Cottenham Fire Station for nearly 22 years and is described as being the ‘life and soul of the station’.

His watch commander Julian Bridgeman said: “Danny was a massive influence at the station. He spent his life helping others and was always organising events for The Fire Fighters Charity, be it car washes or open days. I cannot put into words how much he will be missed by us all, he wasn’t just a colleague for 22 years, he was also a great friend.”

Chris Strickland, Chief Fire Officer of Cambridgeshire Fire and Rescue Service added: “Our on-call firefighters dedicate so much of their time ensuring their local area has a fire and rescue response if needed. They can be called on day and night, making sacrifices at home to respond to their pagers to help those in need. Danny had carried out this role for over 20 years which is remarkable and I remember presenting him with his long service and good conduct medal last year, which was so well deserved.

“Our thoughts remain with Danny’s family at this incredibly difficult time. We will continue to do all we can to support them as well as his colleagues at Cottenham Fire Station.”

Danny leaves his Mum Margaret, sister Katie and brother-in-law Mel. They wrote: “Daniel had the biggest heart and would do anything for his family and friends. He would light up any room. He was incredibly funny and had the most amazing personality. Daniel loved his sports – golf, horse racing, football and he was an avid West Ham and Cambridge United supporter. He was a devoted brother and son, the best we could have ever wished for. We are totally heartbroken and devastated. There are no words that can describe how much we will miss him.”

A book of condolence has been set up on Cambridgeshire Fire and Rescue Service’s website.

Notes to editors: Danny’s family and his colleagues at Cottenham Fire Station have asked that they are not contacted directly at this distressing time. For any queries, please contact Cambridgeshire Fire and Rescue Service media and communication team at pressoffice@cambsfire.gov.uk.