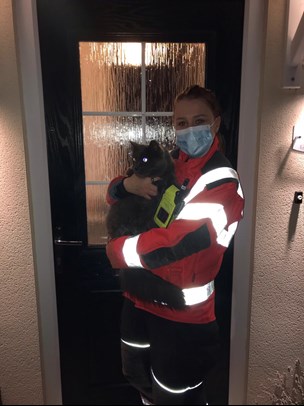 An on-call fire crew came to the aid of a frightened feline trapped in a deep drain.

A crew from Whittlesey was called to a trapped animal on Dandelion Drive in Whittlesey at 7.44pm on Wednesday (April 7). They arrived to find Norman the cat had managed to trap himself in a 15 feet deep drain.

Watch Commander Kev Gilbert from Whittlesey Fire Station said: "The crew improvised and used chimney rodding equipment to entice poor Norman to safety. He was returned to a very thankful family after a two-hour ordeal. The crew did a great job making use of the equipment we have in an innovative way to ensure Norman was rescued safely in front of a watching crowd of neighbours."

The crew was back at their station by 9pm.

Norman’s owner Rosie Saunders said: "Norman had managed to get himself stuck in a storm drain. The crew arrived really quickly and were so friendly, calming and professional. They quickly assessed where he was in the pipe and put together a plan to get him out. They didn't stress him out when doing so. We really appreciate everything they did for us last night, thank you!"

Group Commander Kevin Andrews added: "Our crews are often called to help animals in distress in a variety of different situations. We have specially trained staff that can deal with most types of rescue, so we can try and come to the aid of an animal in need, rather than the owner putting themselves at risk. As shown in this incident we also have a range of equipment on our fire engines to carry out rescues. The crew showed great innovation and did an excellent job in safely returning Norman to his owner."

Whittlesey is one of the Service's on-call fire stations, where crews respond to emergencies while either at work or home. If you live within five minutes travel time of any on-call station, why not consider joining and serving the local community as an on-call firefighter.

More information, including the list of stations, is available in our careers section.