Firefighters complete gruelling Three Peaks Challenge, and make a rescue in the process 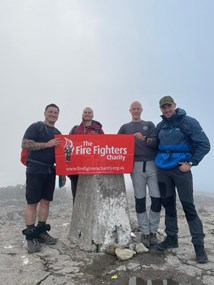 This week Peterborough firefighters took on a huge challenge to raise money for The Fire Fighters Charity.

The team at Red Watch, Dogsthorpe took on the National Three Peaks – a challenge that involves climbing the three highest peaks of Scotland, England and Wales, and includes 26 miles and a whopping 11,000ft of elevation.

They began their mission on Monday 9 August at Ben Nevis in Scotland. After completing the hike to the summit, they headed to the Lake District to take on Scafell Pike. Their final challenge was to conquer the summit of Mount Snowdon in Wales, which they completed in the early hours on Tuesday morning. They completed all three peaks in under 30 hours – an incredible achievement.

If that wasn’t impressive enough, while taking on the challenge they put their rescue skills to the test. On their first hike of Ben Nevis, they came across a walker who was injured, and they quickly turned their attention to assist. They contacted the local Lochaber Mountain Rescue Team, before they began assisting her down the mountain, taking it in turns to carry her in stints. After her condition rapidly deteriorated, they performed immediate first aid, before handing over to the mountain rescue team. Despite getting behind schedule, they continued on their route to compete the final two climbs. 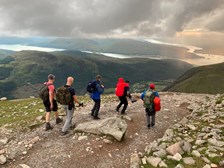 The team have already well exceeded their target of £500, and the total now stands at £1400. All money raised will go to The Fire Fighters Charity, who do incredible work in supporting firefighters and the fire service community, and their families when they need it most.

Firefighter Callum Hodgkin, who took on the challenge alongside his colleagues commented: “We completed all three summits together and made it back safely. There was a lot of teamwork and camaraderie to get through to the end. 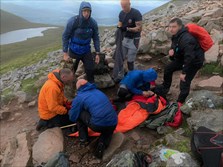 “We've all picked up injuries, we've tackled a rescue, and we've overcome multiple challenges along the way – but we made it.

“We’re so grateful for the support we’ve received along the way and proud to have raised over £1400 for The Fire Fighters Charity so far. Every penny will go a long way to help the charity continue to support the fire service community.”