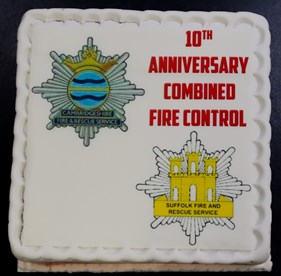 On October 25, 2011, the 999 call functions for Cambridgeshire and Suffolk fire and rescue services joined together to form the first collaboration of its kind. Today marks the tenth anniversary of the combined control room taking calls for both counties.

By joining forces, this collaboration has saved each fire service over £4m over that time. The innovative approach led the way for other services around the country to merge their control functions.

Since coming together, call handlers have taken more than 177,000 emergency calls and sent around 178,000 fire engines to incidents. This is split to around 103,000 calls in Cambridgeshire and 74,000 in Suffolk.

More than 40 staff currently work in the combined fire control in Huntingdon, working on a watch system, similar to firefighters based at stations, with four watches working shifts. The shift pattern involves working two days, 8am until 5pm, then two night shifts, 5pm until 8am, followed by four days off. There is also a day watch where staff work on other duties, such as training new recruits and system maintenance, as well as taking 999 calls. This is overseen by a management team of station commanders.

Cambridgeshire Fire and Rescue Service’s Chief Fire Officer, Chris Strickland, said: “We are all very proud of our combined fire control. Leading the way with a project like this was obviously a daunting prospect at the time, but it’s thanks to the great people across all the watches in control that have made it a success.

“Our call handlers are the first voice people hear when they call us in need of help. They offer calm, professional and often life-saving advice to residents at their time of need. Not only this, but they also ensure fire engines and officers get to emergencies quickly and ensure we have fire engine cover across both counties. They are our heroes in headsets.”

Dan Fearn, Interim Chief Fire Officer for Suffolk Fire and Rescue Service, said: "We are proud to celebrate the 10-year anniversary of our combined fire control arrangement based at Cambridgeshire Fire HQ. The project has clearly demonstrated what can be achieved in terms of collaboration and efficiency.

"The combined control room continues to bring benefits with an increased focus on adopting joined up ways of working wherever possible and sharing assets where appropriate. Suffolk Fire and Rescue Service would like to say particular thanks to all those who have worked on the project over the last 10 years to make this possible, including our professional control room teams who are the first line of response to both the public of Suffolk and Cambridgeshire as well as other partners who help us serve our communities when in need of our services."

Over the last 10 years there have been many incidents that challenged the emergency call handlers. Tidal surges in Lowestoft, the long, hot summer of 2018 resulting in many outdoor fires, as well as the flooding seen over the festive period last year, all resulted in hundreds of residents calling for assistance.

You can find out more about the role of an emergency call handler in the combined fire control in the careers section.