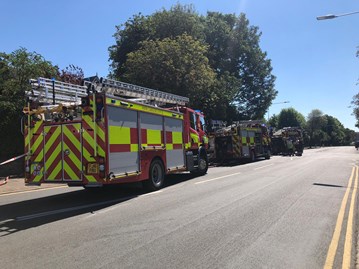 As the hot weather looks set to continue over the weekend and into next week, firefighters want to help ensure residents enjoy the summer safely.

After a house fire in Peterborough on Wednesday, crews are urging people to stay fire safe and follow some simple tips, so they can avoid a fire that could cause significant damage.

Fire crews from Dogsthorpe, Stanground and Whittlesey, along with the north roaming fire engine, were called to a fire on Lincoln Road at around 11.40am. They arrived to find a fire involving a three-storey detached house.

Crew Commander Liam Siddons, the officer in charge of the incident, said: “Before we arrived at the scene we could see a large plume of smoke coming from the address. The crews worked hard to get the fire under control and prevent it from spreading to the whole house. They did a great job to get the fire out quickly and limit the damage caused.

“We found the fire had started in the garden and spread quickly due to the ground being dry. Sadly this has been a common occurrence over the last few weeks as the warm summer weather continues. It’s hard to pinpoint exactly how the fire began, but there are definitely safety measures people can take to avoid having a fire, such as making sure cigarettes are fully extinguished and disposing of any glass bottles or containers properly. Also, think about alternatives to charcoal BBQs and make they are well away from any fencing, trees and garden furniture. And most importantly, do not have a bonfire to get rid of garden waste.

“This fire spread rapidly from the garden and could have taken hold of the entire house, but the crews did a great job to tackle the quickly and prevent it from spreading. While the weather remains as hot and dry as it is we really urge residents to stay fire safe and follow our simple tips to avoid having a fire.”

This fire is one of many that crews have been dealing with over the last six weeks or so. Having seen temperatures hit the highest ever recorded in July, firefighters have dealt with their busiest ever period. In July alone they attended 1000 incidents, which not only included large fires, but also road traffic collisions and animal rescues.